For the first time since Student Center East was built in 1998, all three salons of the State Ballroom in Student Center East have been renovated. This project brings a new level of lighting, sound, and video capabilities to the Georgia State community. Video projection capabilities went from a system with one built-in projector to seven built-in projectors and built-in screens. A built-in camera has been added to capture, record and/or stream hybrid events as needed.

Each of the three salons has a divided sound system or one large feed can go into all three at the same time. The first phase of a sound system renovation of replacing the obsolete speakers was completed in the summer of 2021, and the second phase included a new state-of-the-art Crestron control system which makes running events more user-friendly.

A quick video highlighting the changes is available here.

Some other upgrades include: 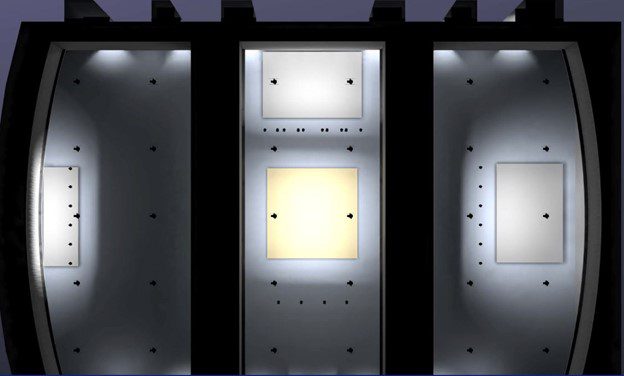 Rendering of ballroom from above

See our "Make a Reservation" page to reserve the State Ballroom for your event!

Any questions regarding the project should be directed to David Murkison, Associate Director for Building Administration at dmurkison@gsu.edu.

Send this to a friend